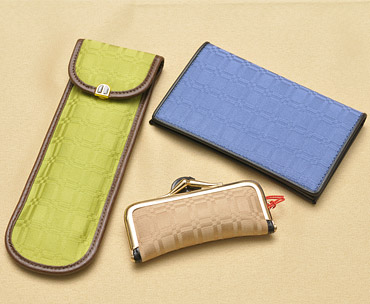 During the late Edo period (1800's) Shinjo Kameaya-ori Fabric was well known for its high quality, but after that time it went out of fashion, leaving behind only its name in the minds of locals.
Shinjo City is located in the northern part of Yamagata Prefecture with a population of approximately 40,000.
Shinjo Kameaya-ori fabric originated in 1800's when the feudal lord Tozawa Masatsugu, who governed the Shinjo area, encouraged his retainers' wives and daughters to learn to weave in order to help reinvigorate his clan's finances.
To help establish the new weaving industry, textile artisans were invited from outside the area to research new weaving techniques. Through their painstaking efforts they developed the Kameaya-ori weaving style.
Although it became famous during the Boshin War (a civil war fought within Japan after the collapse of the Edo period shogunate), there was a great fire in the Shinjo area, resulting in a loss of all the relevant machines and tools, and the decline of the popularity of this technique.
Later, in 1985, the Shinjo Kameaya-ori Fabric Transmission Association was established and this technique was revived. 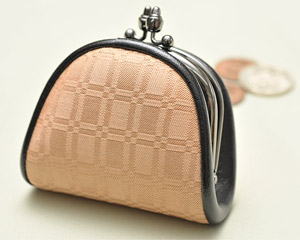 Varied patterns and an elegant texture made by hand-weaving techniques unique to Kameaya-ori fabric
The most distinctive feature of Kameaya-ori fabric lies in its unique weaving style called Shamon-ori, which features a fine and exquisite pattern. Another characteristic is its soft touch and elegant gloss. These characteristics are created by a process called seiren in which woven cloth is simmered, after which impurities are simply washed away.
The Shinjo Kameaya-ori Fabric Transmission Association creates its products by dyeing pure white Kameaya-ori fabric with plant dyes, then using the fabric to make purses, pouches, neckties and other small items.