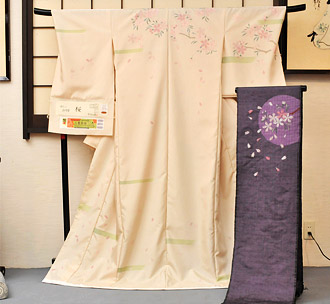 Yonezawa City has always been one of Japan's major silk weaving districts. In recent times it has transformed itself into a comprehensive textile region producing both Japanese-style and Western-style garments. Yonezawa City, with a population of approximately 90,000, is located in the southeast part of Yamagata Prefecture.
Yonezawa-ori fabric originated about 220 years ago when the feudal lord Uesugi Yozan encouraged people to make textile called Chijimi-ori. This fabric was made from Aoso (a plant similar to blue linen), and was produced to help the clan and local people prosper.
Chijimi-ori fabric is named for the elaborate wrinkles on its surface which create an elegant and sophisticated appearance.
It especially refers to fabric which is made by inserting strong thread plying into the woof, soaking it in hot water, and finally wringing it out, resulting in fine wrinkles. This method was originally used on cotton, linen, and silk fabrics.
Later the area became a silk weaving region, in which the entire process from the farming of the silk to the production of the fabrics was done locally. The fabric was extremely soft and was dyed using local plants, and the Yonezawa region became well known throughout the country as a major silk weaving area during the late Edo period (around 1800).
After the Meiji Restoration (around 1868) new, more modern synthetic fabrics such as rayon were also manufactured. Presently Yonezawa City has become a comprehensive textile producing region, in which not only traditional but also modern fabrics are produced. 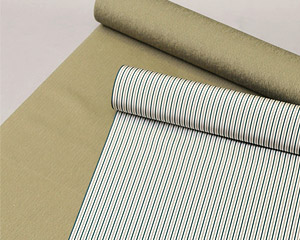 Oitama Tsumugi is the name given to pongee (a soft thin fabric woven from silk) that has been hand-dyed using traditional plants, as the southern region of Yamagata Prefecture is called Oitama. Oitama Tsumugi has also been designated as a national object of traditional craftwork, like the Miyagi Kokeshi.

As of March, 2010, there are 106 weaving industry related companies in Yonezawa City that manufacture a variety of woven products.
Fabric manufacturers in Yonezawa have also endeavored to make technological developments in the field of women's clothing fabrics, and have developed world-class weaving technology comparable only to that of Como in Italy. Yonezawa boasts the number one production of Hakama fabrics in Japan. (A Hakama is a pleated skirt-like article of traditional Japanese clothing worn mainly at formal occasions)