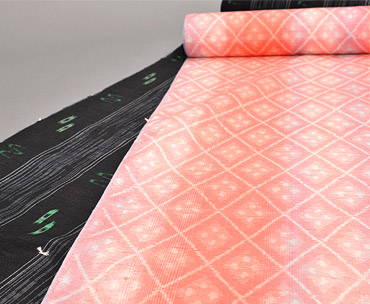 Nagai City has historically been a silk-producing region, however it recently has become famous nationwide for the production of its Nagai-tsumugi pongee, with the name of Yoneryu-kasuri.
Nagai City is located in the southern part of Yamagata Prefecture and has a population of nearly 30,000.
The basin around Nagai City is divided into two areas called the Nagai district and Shirataka district, both of which were governed in the early Edo period (1600's) by Naoe Kanetsugu, a famous retainer of the feudal lord of the Uesugi Clan of the Yonezawa region. Kanetsugu encouraged local farmers to grow Aoso (a plant which when made into fabric resembles linen) which was shipped to other regions in the country. However, under the reign of the lord Uesugi Yozan (the 9th lord of the clan) silk production became the main industry of the region. Many artisans were later invited from Echigo (present Niigata Prefecture, located to the south-west of Yamagata Prefecture) to help establish the silk weaving industry.
Furthermore, during the Meiji period (late 1800s) textile wholesale merchants in Nagai City invited consultants from Toka-machi Niigata Prefecture in order to spread new Kasuri techniques, thus Yoneryu-Kasuri pongee, representing Nagai-tsumugi pongee, was born. 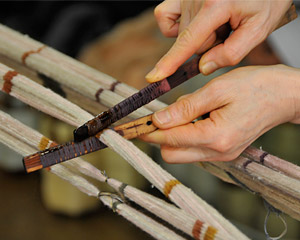 Yoneryu Kasuri features simple patterns.
Although Yoneryu Kasuri is representative of Nagai-tsumugi pongee, its name Yoneryu comes from Ryukyu-kasuri (Rykyu is the old name for the present Okinawa Prefecture, the southernmost prefecture in Japan). The Yoneryu-kasuri pattern was created resembling that of Ryukyu-kasuri, and then shipped by the Yonezawa clan (located in what is now Yonezawa City in Yamagata Prefecture), thus it was called Yone-ryu. It is actually representative of Nagai-tsumugi pongee.
The fabric uses a unique manufacturing technique, where the weaving pattern of the threads dyed with traditional method are adjusted one by one on the warp and the woof. There are also machine-made Nagai-tsumugi pongee fabrics which can be worn for daily activities. Hand-made Oitama-tsumugi pongee is designated as a national traditional artcraft.