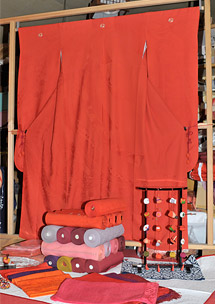 Safflowers, called benibana in Japanese, were brought to Japan from Egypt via the Silk Road. During the mid-Edo Period (around the 18th century) safflowers became rooted in Yamagata Prefecture, and safflower dyeing businesses became popular.
Safflowers were brought to Japan during the Asuka period (592-710) and then to Yamagata during the Muromachi period (1338-1573). Beginning in the mid-Edo period (18th century), Yamagata has become the largest safflower-producing region in Japan thanks to the prosperity of Mogami River transportation. The Mogami River is the biggest river in the prefecture, and through this river many local products, including safflowers, were shipped to Kyoto and Edo via the Japan Sea. However, the availability of cheap chemical dyes that were imported beginning in the Meiji Period (1868-) has led to a decline in demand, and few dyeing and weaving artisans remain.
In 1992, Kahoku Town, a former major safflower-producing area with a population of 20,000, was to co-host the Benibana Kokutai, a national athletic meeting taking place in Yamagata Prefecture. In order to reintroduce local dyeing techniques, the town asked Suzumasa, a safflower dyeing factory, to reinvigorate safflower dyeing.
Takao Suzuki, a representative of the factory, has since established his own method of safflower dyeing after much trial and error. 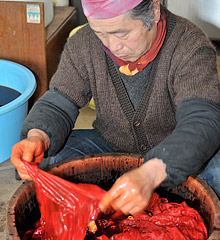 Benibana dye, created using the natural water of Mt.Chokai and acid from fruits, produces a bright red color. Mt.Chokai is the highest mountain in the prefecture and situated in the northwest, bordering with Akita Prefecture.
Takao Suzuki dyes fabrics, including silk scarves and kimono, using traditional techniques with safflowers that he has grown himself, natural water, and acid from fruits. His method is called Ato-zome, literally "after-dyeing", in which fabrics are dyed after weaving. Recently he was able to bring about a more vivid red color by employing natural water from Mt. Chokai. Since he never uses chemical dyes, and with the medicinal effects of safflowers said to enhance blood circulation, his products are especially valued by health-conscious people and connoisseurs.