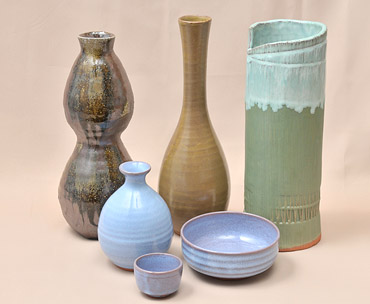 Shinjo-yaki pottery is created using rich clays and glazing techniques passed down from generation to generation, which are used to make many daily-use items
The topsoil in the Higashiyama district, located in the east of Shinjo City, is covered with a thick layer of clay. The founder of Higashiyama-yaki, Wakui Yahei, who was from Echigo province (present Niigata Prefecture), was impressed by Higashiyama's clay while he was traveling throughout the northern region of Japan.
He opened the kiln under the patronage of Shinjo's Tozawa Clan in 1841. The raw materials used are still taken from the premises, the high quality clay making the finished pottery strong and durable, with a texture that continues to develop as the piece is used. For these characteristics, this pottery is highly esteemed. 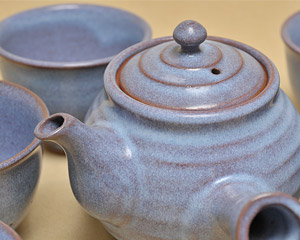 These functional works of art have a mysterious pale blue beauty.
"Higashiyama-yaki pottery features clear blue Namako-yu (glaze) whose color is described as the color of shade falling on the snow in the Dewa region (modern Yamagata Prefecture), and the aim is to create wares for daily use. Mr.Muneyoshi Yanagi, who founded the Mingei movement (Mingei is a word coined by Mr.Yanagi who encouraged to use items familiar to common people's daily life but also having artistic handworks), praised the craftsmanship of the earthen pots highly. The current 6th generation proprietor of the kiln, Mr.Masakazu Wakui, produces Muyu-Yakishime and Konoha-tenmoku which are modeled after traditional works.