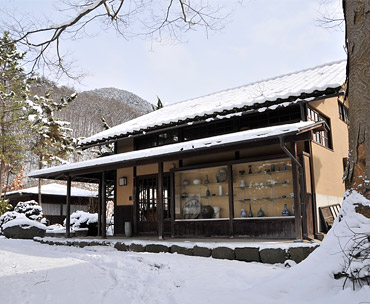 Known as the "Pottery Village", the area of Hirashimizu has Yamagata's oldest history.
Hirashimizu district is located in the southern foothills of Mt.Chitose in the southeast area of Yamagata City (Yamagata's prefectural capitol with a population of 250,000).
It is said that during the Bunka era (1804-1817) Ono Tojihei, who came from Hitachi province (present Ibaraki Prefecture), founded Hirashimizu-yaki. However, it is also said that pottery had been produced in that area long before he arrived.
During the Bunsei era (1818-1829) Abe Kakuzaemon of the Soma clan visited here, built a kiln, and spread the techniques of Soma-yaki pottery, which contributed to Hirashimizu becoming a large pottery-producing area. During the middle of the Meiji period (late 19th century) when the area was enjoying its most prosperous time, over 30 kilns were in operation. But as time has gone on, the number of kilns has diminished; now only 3 kilns are in operation. 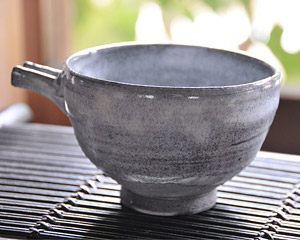 Each kiln produces pottery with specific characteristics, all created from the area's iron-rich clay.
Hirashimizu-yaki pottery differs according to which kiln it has been fired in, as well as which kind of glaze and techniques were used. The basic clay taken from Mt. Chitose contains iron and is hard by nature, therefore it can be used in making both porcelain and ceramic wares.
Many wares used for daily necessities used to be made, however, recently each kiln is looking to create new types of products using Maruyama rock which is available from weathered quartz trachyte.