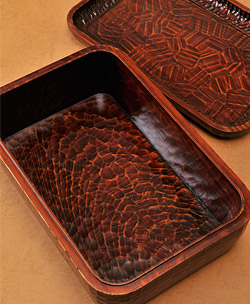 This is Sakata's Kuro-matsu (black pine tree) craft, using wood from an erosion control forest
It was Mr. Kokyu Honma, the 3rd generation proprietor of the Honma Family in Sakata City, who planted a black pine tree erosion control forest in the Shonai sand dunes with his private assets. The name of Kokyu-bori carvings was taken from his name, as wood from the black pine trees are used to make items such as trays with carved patterns. Although Kokyu-bori carvings, which have been produced since Edo period (1603-1868), were once extinct during the early Showa period (early 20th century), they made a comeback during the Heisei period (1989-) through the efforts of two men: Mr. Shoji Konno, the president of the Sakata Mokko Dokokai (wood craftsman's association) and Mr.Hideo Kikuchi, a furniture artisan. 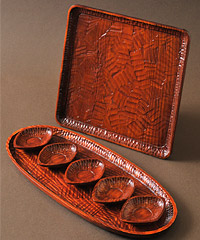 Aiming for the classical carving pattern of Kokyu-bori: a simple but tasteful pattern cherished from long time ago
The most conspicuous feature of Kokyu-bori is the unrefined but rustic beauty of the carving pattern. Mr.Kikuchi tried to reenact this pattern by studying historical trays that remained in old families, followed by creating Sakata Kokyu-bori carvings consisting of Ichi-matsu (checkered) patterns and Take-ami (bamboo net) patterns. Furthermore, he produces his authentic traditional carvings by making all his carving tools by hand, and tries hard to promote traditional art crafts in the region.