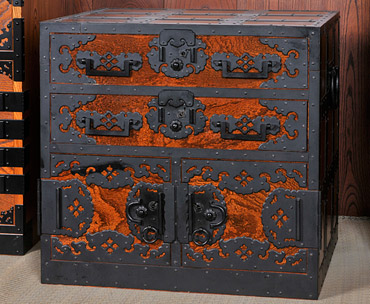 Together with Ogi on Sado island in Niigata Prefecture and Mikuni in Fukui Prefecture, Sakata, a port town, has been referred to as one of the three major ship chest producing regions in Japan.
Funa-dansu are chests for storing the valuables of sailors, which were used mainly from the Edo to Taisho periods (1603-1926) in Kaisen ships (ships carrying people and goods). Ship chests made at the Sea of Japan coast are gorgeous when compared to those made on the Pacific side. In those days there were two business styles in the shipping industry; one was Unchin-zumi, where ships earn profits by transportation fees, and the other was Kai-zumi, where ships stocked goods to sell directly like Kita-mae-bune ships. Kita-mae-bune played an important role in the Japan Sea. Therefore, Kai-zumi ship's profits were larger than that of Unchin-zumi ships. Since the end of the Meiji era the chests have been made to order by sailors. 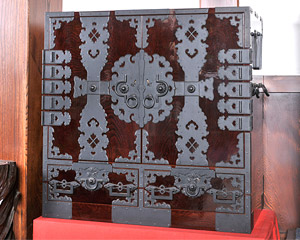 During the golden age of the shipping industry, ship chests were produced with elaborate techniques in order to cater to diversified uses.
Funa-dansu chests are small and portable to be able to be carried around within the ship. The outside is made of zelkova wood reinforced with iron. Inside, paulownia wood is used, making them waterproof. There are various types of ship chests for different purposes, including Kake-suzuri, Cho-bako (a kind of safety box for storing cash or important documents) and Han-gai (a dresser). Funa-dansu are said to have both beauty and functionality, and can be said to have been the pinnacle of artisans' craftsmanship in those days. 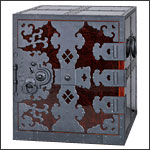 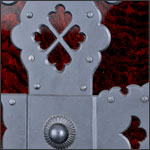 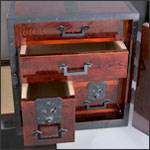 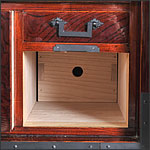