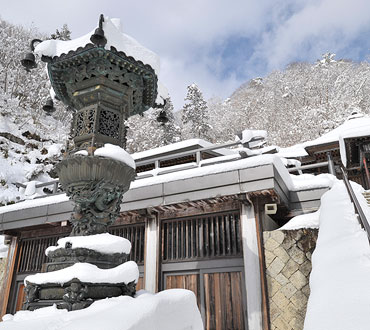 Metal casting in Yamagata has been nurtured throughout a more than 950-year history.
Metal casting is said to have started in the late Heian period (late 12th century) by metal casting artisans who came to Yamagata as servants to samurai warriors. When samurai subjugated the Tohoku region, including the Yamagata area, these artisans followed and discovered that the sand in the Mamigasaki River flowing through the city was suitable for making molds.
During the early Edo period (early 17th century) Mogami Yoshiaki, lord of Yamagata Castle, created the Do-machi district where metal casting artisans lived. As Dewa Sanzan (the three sacred mountains of Dewa, known as a center for mountain worship) attracted many followers from all over Japan, Buddhist altar fittings and daily necessities were made for souvenirs with metal casting. Later they made big Buddhist suspended bells, iron kettles and teakettles, and many others, thus Yamagata has grown to a major metal casting area. 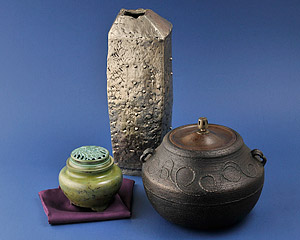 It features beautifully thin and delicate skin, therefore it was among the first to be designated as a traditional art crafts by the Japanese government.
The traditional techniques used in casting Yamagata metal are: first the Kata-biki (a mold is made from sand), then the Monyo-oshi(a pattern is made to the mold), and finally Hada-uchi(fine irregular patterns are made on the surface), requiring high-degree techniques. With these techniques, thin skinned and beautiful surfaces are created which are characteristic of Yamagata metal casting. Recently many varied metal crafts have been made by local casters with superb designs. 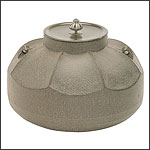 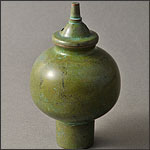 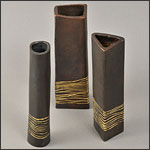 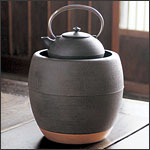