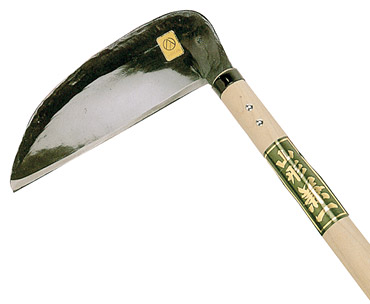 The roots of Yamagata cutlery production date back to the work of blacksmiths during the Nanpoku-cho period (1336-1392).
Yamagata cutlery craftsman Shoji Naotane became famous nationwide.
It is said that Yamagata's cutlery tradition began under the reign of feudal Lord Shiba Kaneyori during the Nanpoku-cho period (1336-1392). In the Edo period (1603-1898) Mogami Yoshiaki, the Lord of Yamagata Clan, made a special district, Kaji-machi, for blacksmiths and gave them special privileges.
Master Japanese sword craftsman Shoji Naotane established his legacy here during the late Edo period (mid-19th century). Since the abolishing of Samurai at the beginning of the Meiji period in 1868, craftsmen in Yamagata City have been making agricultural tools as well as kitchen knives and pruning shears. 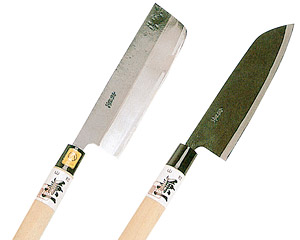 With the spirit inherited from master Naotane , craftsmen in Yamagata City adhere to the highest of standards while making cutlery of the best raw materials and meticulous attention to detail.
The Yamagata Cutlery Industry Association, channeling the spirit of Yamagata's own Shoji Naotane, consists of 3 departments devoted to the production of a single type of cutlery: sickle, scissors and gardening. Each member craftsman vows to create his or her products using the highest quality materials and techniques. Soft iron and hard steel are combined, heated until they glow red, connected, and brought to an edge through continued working in a historic process called Jiyu-Tanren which is still used. Recently a new product development project has made use of these techniques.