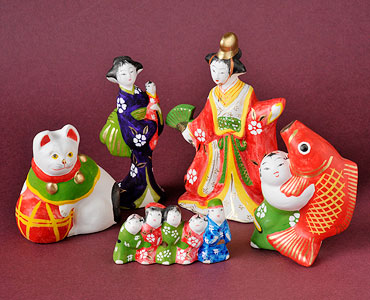 For 220 years these lovely clay dolls have been produced by the Sagara Family, the retainer of the Yonezawa Clan which governed the Yonezawa area during the Edo Period (1603-1868).
Sagara Seizae-mon Atsutada built the Narushima kiln with which the Yonezawa Clan contracted, and began to make dolls from clay found in his backyard in the 1790's after retiring from his clan duties. Sagara family members have continued to produce dolls using the same clay and techniques. It has been referred to as one of the three main styles of dolls in Tohoku region, along with Hanamaki and Tsutsumi Dolls. Production was halted during World War II (1941-1945), but Takashi Sagara began making Sagara Dolls once again in 1967. 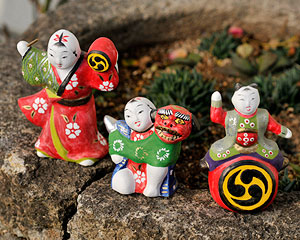 With triangular eyes and humorous narrative themes, Sagara Dolls express timeless loveliness.
Clay is pressed into the two sheets of earthen form, pasted together, and trimmed to shape, then dried and baked after being removed from the form. After that they are coated in white with chalk and colored. They feature triangular-shaped eyes unique to Sagara dolls, which are said to have been invented by either the founder or the second generation Sagara. Many dolls are only 13 centimeters high, conveying heartwarming and cute impressions with their humorous themes.