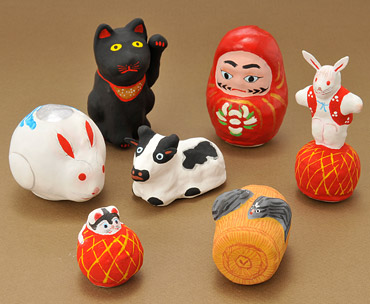 Yamagata Hariko are locally produced toys with humorous facial expressions, said to have originated in the works of a Buddhist sculptor who moved from Kyoto to Yamagata
While on a pilgrimage to the Three Holy Mountains of Dewa of Yamagata, Shibue Choshiro, who was active in making Buddhist sculptures as well as dolls in Kyoto, found the Japanese paper-producing districts of Suzukawa and Sozuki in Yamagata, inspiring him to make Shibue Dolls.
In 1901 Mr.Tokujiro Iwaki, who was one of Shibue Choshiro's first apprentices, continued this tradition with Yamagata Hariko (papier-mâché dolls).
The Iwaki Family keeps almost 300 wooden molds, preserving the more than 100-year history of these dolls. 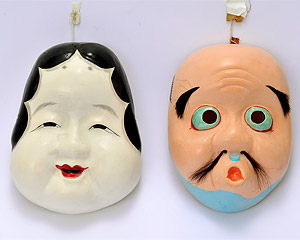 Hariko dolls have a unique style, with their chubby form and the gentle feel of Japanese paper
Yamagata Hariko consist of a variety of traditional charming objects including animal figurines and masks depicting plump women. These objects are made by placing moist high-quality Japanese paper into a wooden mold, then covering the paper with Funori (a traditional Japanese starch made from seaweeds) many times and allowing the piece to dry in the sunshine. The formed Japanese paper is coated with Gofun (made from pulverized seashells) and is finished by decorative painting. The Tama-nori-Usagi design featuring a rabbit balancing on a ball, which was selected as a design for New Years Post Cards in 1999, is still very popular.