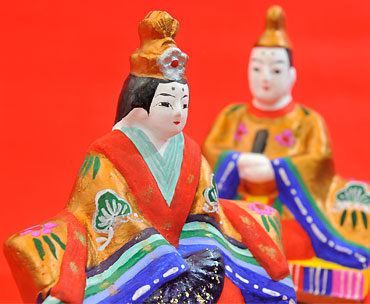 Brilliantly colored Udogawara Dolls have been preserved in the port city of Sakata since the Edo period.
These clay dolls are said to have originated from Fushimi Dolls transmitted from Kyoto via ships traveling the northern route. During the late Edo period (mid-19th century) Oishi Sukeue-mon started making the dolls, which have continued down through generations. The wooden molds are said to have been made by an engraver from the Kyoto area. Although dolls were initially made using both wooden and earthen molds, earthen molds became mainstream in the 1890s, leading the Oishi Family to produce their own molds. There are many varieties of dolls, including dolls from old tales, graceful dolls, and modern fashioned young women's dolls with their unique and appealing style. Presently the Udogawara Doll Preservation Society, led by Ms.Yae Oishi, keeps the tradition alive.
Presently Udogawara Ningyo Densyo-no-kai (doll making transmission group) represented by Ms.Yae Oishi, keeps tradition and activities. 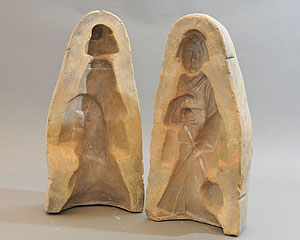 Many different molds and careful decorating techniques create brilliantly colored dolls. They are still made in the traditional method by using glue, chalk and paint.
Clay is first placed into the mold, creating the doll's shape, and is then dried and baked. Next, the baked earthen doll is coated several times over by chalk which has been dissolved in glue. Finally, pigment that has been dissolved in glue is used to decorate the dolls. This traditional method has been used since old times.
There are variety of molds, making it possible to create more than 200 kinds of dolls such as Kissho Dolls (auspicious divine dolls said to invite happiness) such as Ebisu and Daikoku, Momotaro and Ushiwaka Benkei dolls from old tales, Tarai-mochi Onna (female dolls holding washbowls) and ballerinas.
Local people have long loved these dolls, and frequently buy them for their loved ones as birthday presents. 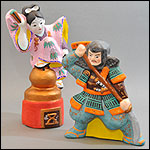 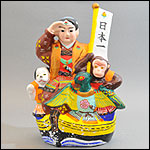 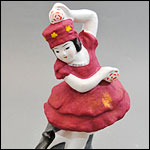