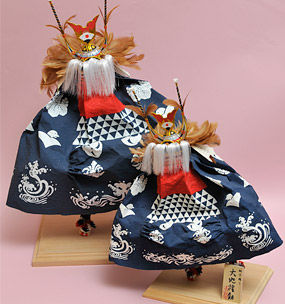 Local women in Fujishima town started making these dolls by hand to revitalize the town.
Since old times Fujishima Town (now a part of Tsuruoka City) has been known as the land of Shishi, which are imaginary lion's heads. The Shishi dance is said to have originated during the Muromachi Period (1338-1573) from Bugaku, a court dance and music performed mainly at the Imperial Palace. This dance is still performed at five Shinto shrines every year as a traditional art form. This Shishi dance is manifested into the doll by making them with great care using real bird feathers and Japanese paper. Doll production began in 1995 as a way of local economic promotion, and the Shishi Dolls received a gold prize at the Tohoku Village Revitalization Product Fair. As it is time-consuming work, dolls are only made to order. 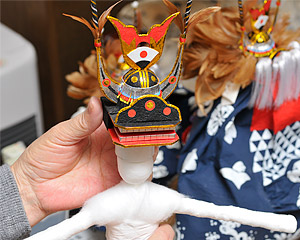 The dolls are modeled after the Fujishima Shishi dance, and called Daichi Yakudo, meaning vibrant movement on the earth
The Shishi Dolls originated from the Shishi of the Ryosho Shinto Shrine. The shishi-gashira (lion's head), wearing an indigo blue costume with white a wave and flying plover pattern, along with the shining red, white, gold and silver colored lion's head, is sure to impress while stamping vibrantly on the ground. After 15 years of trial and error, the technique of production has been established. 87 parts are cut and pasted; it takes 10 days to complete the doll, which is a high-quality handmade craft.
Notes: Shishi literally means lion, but in this case it is a legendary creature. It has been used at shrine festivities to ward off evil spirit.