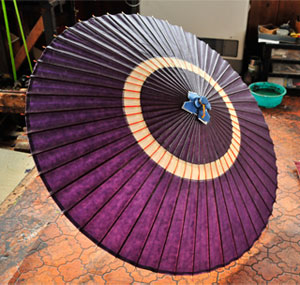 The 200-year old umbrella making tradition in Yamagata was promoted by the ruling clan in the late Edo period (mid-19th century), leading the area to become a major production region.
It is said that Yatabe Seitaro began to produce umbrellas in Yamagata in 1789. When Lord Mizuno moved to Yamagata castle from Enshu Hamamatsu (present Shizuoka Prefecture) in 1849 he encouraged low-ranking samurai warriors to make umbrellas. These umbrellas became very popular among pilgrims traveling to the sacred mountains of Dewa Sanzan. In their golden age there were more than 100 umbrella shops, making Yamagata the largest umbrella production area in the Tohoku region. However, as the western-style umbrella has become mainstream since its introduction in 1955, only the Furu-uchi umbrella shop in Higashi-hara town continues to make traditional Japanese umbrellas. 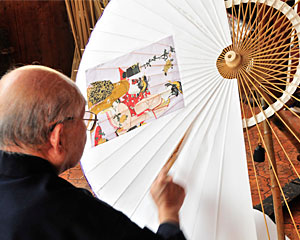 This traditional umbrella is made by a father and son team who are the only artisans remaining in this field in the prefecture; the product is crafted with the particular requirements of this snowy region in mind.
The second-generation proprietor Seiichiro Furu-uchi and his son, Kiyoshi Furu-uchi, make the umbrella frame using bamboo. The frame is then covered with Japanese paper, and finished by coating with oil, continuing on the traditional method of producing umbrellas. Ban-gasa umbrellas, with their 52 ribs and diameter of 110 centimeters, are strong and large in order to stand up to the harsh climate of this snowy region. Janome-gasa umbrellas are made with a two-staged closing design so that they can be used effectively on days of strong wind and snow