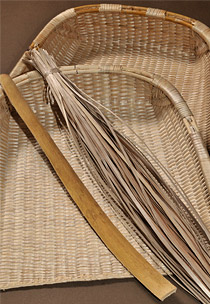 The Mi is an agricultural tool that is said to have saved the villagers of Jinego, introduced to them the female traveler Osato.
The Mi, a traditional agricultural tool, was first made in the Jinego district of Oishida town almost 500 years ago. It is said that at that time a woman named Osato happened to visit and heard that villagers were suffering from bad crop. She decided to stay there and taught them how to make the Mi, an agricultural tool to get rid of husks or dust from the harvested crops. An old document written in 1867 "Mi-no-sadame" (the rule of Mi) says that the knowledge of this tool should be kept within village. Osato was eventually honored in the village's Shinto shrine. 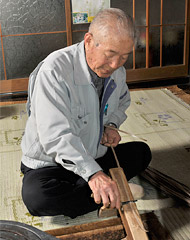 Oishida Mi have a reputation of being so finely woven that they could not possibly be handmade, a weave which also makes them easy to hold.
Materials such as the bark of maple, lacquer and wing nut trees are used to make Mi at the Jinego district. With wing nut bark used for the vertical shaft, maple bark is cut into centimeter-wide strips, which are horizontally connected and knitted, and finished by putting Nemagari bamboo along the curved edges. Presently only one member of the Jinego Industrial Cooperative inherit these techniques.