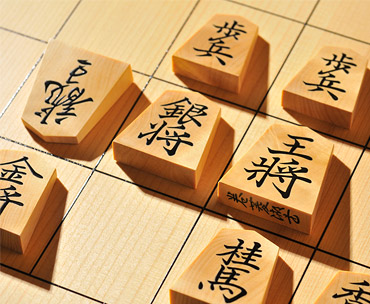 The origin of Shogi piece production dates back to the side jobs of the Tendo clan's samurai warriors.
Tendo City has since become the largest shogi piece producing region in Japan.
Shogi piece production in Tendo began in the late Edo period (mid-19th century) during a period when the game of Shogi was rooted among the commoners. As part of financial rehabilitation programs, the Tendo Oda clan encouraged their samurai warriors to make Shogi pieces, on which they wrote Kanji characters with lacquer, creating high-grade pieces.
Beginning in the Meiji period (1868), the process was divided into two parts: cutting wood and writing characters with lacquer. When mass production techniques, including the mechanization of cutting wooden pieces and stamped printing ("Oshi-goma"), were first used during the Taisho period (starting in 1912), Tendo became the largest shogi piece production region in Japan. Tendo continues to make a majority of Japan's shogi pieces. 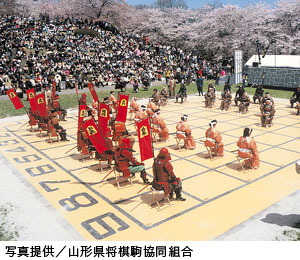 High-quality shogi pieces made by famous artisans in Tendo, a town where shogi pieces have been designated by the national government as a traditional art craft.
In 1996 Kaki-koma (written shogi pieces), Hori-koma (engraved shogi pieces), Hori-ume-koma (engraved and filled in shogi pieces) and Mori-age-koma (embossed shogi pieces) were designated as a national traditional art craft due to their highly valuable and artistic craftsmanship. Tendo City holds shogi-related events every year in order to transmit and spread shogi culture, including Ningen Shogi, where a game of shogi is played using human participants on a life-sized board. Courses are held to cultivate future generations of shogi piece craftsmen, and shogi pieces continue to be essential to the development of Tendo City, the "Town of Shogi Pieces".