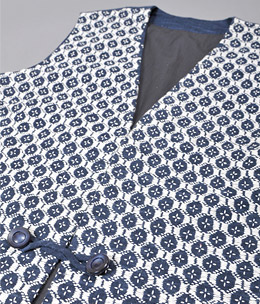 The Hirata Sashiko school has been publishing basic quilting books as well as DVDs for 25 years.
In 1983 seven members of Somemono-no-kai (a group of people engaged in dyeing fabrics) encountered Shonai Sashiko quilted workwear. They were so impressed by it that they created the Sashiko-no-kai association, which now has 45 members. The number of students of Hirata Sashiko school now exceeds 400, and its graduates are engaged in transmitting this traditional technique throughout the Shonai region (the Shonai region is situated along the Japan Sea-side of the prefecture).
They are involved in various activities such as holding fashion shows, exhibitions, publishing Shonai-Sashiko textbooks, books of excellent works, making DVD of how to stitch basic pattern, and many others. 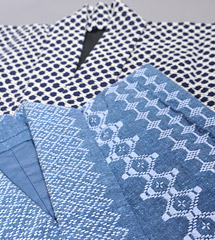 The vertical, horizontal, and diagonal stitches in Shonai Sashiko create geometrical patterns, making for a beautiful and strong fabric.
There are about 40 different basic patterns including Kome-sashi (rice pattern ), Uroko-sashi(scale pattern), Hishi-sashi(rhomb pattern) and Soroban-sashi (abacus pattern), which can indicate many things such as women's wish for good harvest, large catch, business prosperity and affection toward their family members. The traditional methods are upheld, sewing stitch by stitch on a blue cloth with unbleached white threads. These works have recently received high praise for their heartwarming beauty.