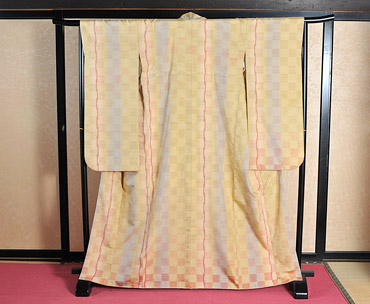 Shirataka Tsumugi pongee is hand-crafted carefully, from the selection of raw materials to the completion of the finished product, by a single artisan.
(Shirataka Tsumugi pongee originated in Shirataka Town, which is located in the southern part of the prefecture, with a population of about 16,000)
Shirataka Tsumugi pongee, like Nagai Tsumugi pongee, originated during the reign of the feudal lord Uesugi. He encouraged the people to change their local economy from the production of raw textile materials such as Aoso and safflowers to the production of silk fabrics, an industry which also made the region self-sufficient. Similar to the Nagai region, Yoneryu-kasuri fabric has been woven in the Shirataka district since the mid-Meiji period (1870s). However, during the late Meiji period (1900's), Shirataka Tsumugi pongee established its own unique style of dyeing by introducing the Itajime technique. This technique, learned from engineers from Ashikaga City in Tochigi Prefecture, features various patterns created by pressing piled threads on the washboard, resulting in a sensitive Kasuri pattern.
The Shirataka region still today produces Kasuri and Omeshi (a kind of silk fabric used for Kimonos) fabrics using the Itajime technique. 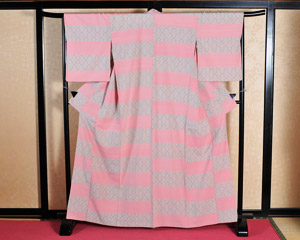 The most representative types of Shirataka Tsumugi pongee include Shirataka Omeshi and Shirataka Itajime-Kogasuri, both made using the Itajime dyeing method.
Among the two textile factories located in Shirataka, the Komatsu factory produces mainly Shirtataka Omeshi and Shirataka Itajime Kogasuri fabrics. The Itajime dying method can be seen only here in Japan, and Kasuri features patterns made by Itajime and finely crafted wrinkles (seen in the cloths) with unique texture. Its craftsmanship highly praised, it was designated as a National Traditional Craft in 1976 and in 2007 achieved the status of Prefectural Intangible Cultural Property.
※As for Okitama Tsumugi pongee, please refer to the corresponding page